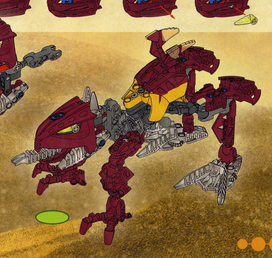 When Glatorian needed to cross the vast desert of Bara Magna, they did it on sand stalkers. These four-legged mounts could go long distances without food or water and could cross dunes without losing their footing. Though not as fierce in battle as the rock steeds of the bone hunters, they had greater endurance than those creatures and were easier to tame.1

Skopio were the only natural predator of the rock steed, although they seemed to prefer hunting the sand stalkers Glatorian used for mounts (which were a little less able to defend themselves).2

Although bone hunters could ride sand stalkers, they preferred rock steeds, which were better in combat.5

Baranus wagons were originally built to be used with sand stalkers, rather than the unpredictable Spikit, since they were much faster than Spikit. However, as time passed, the more powerful creatures were chosen to replace the sand stalkers, as the Spikit's fierce nature made it an excellent means of defense.6

Glatorian used sand stalkers as mounts.7 Agori could ride sand stalkers, but they generally used motorized or animal-drawn vehicles instead.8

Sand stalkers were generally not used in the arena. They were not really bred for combat, but for endurance. Although they could fight, getting one injured just for a match was a waste of resources.9