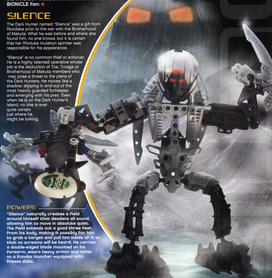 Silence was a Dark Hunter.1, 2 He was believed to have been mutated by Roodaka into the form he was known for. His specialty was the abduction of Toa, Turaga, and Brotherhood of Makuta members. He was capable of creating a field around himself which deadened all sound. He carried a double-edged blade mounted on his forearm and a Kanoka disk launcher equipped with freeze disks.2

The Dark Hunter named "Silence" was a gift from Roodaka prior to the war with the Brotherhood of Makuta. What he was before and where she found him, on one knew, but it was certain that her Rhotuka mutation spinner was responsible for his appearance. "Silence" was no common thief or enforcer. He was a highly talented operative whose job was the abduction of Toa, Turaga, or Brotherhood of Makuta members who might have posed a threat to the plans of the Dark Hunters. He moved like a shadow, slipping in and out of the most heavily guarded fortresses and emerging with his prey. Even when he was on the Dark Hunter's island, no one was ever quite certain where he might be lurking. "Silence" naturally created a field around himself that deadened all sound, allowing him to move in absolute quiet. The field extended out a good three feet from his body, making it possible for him to grab a target and pull him inside of it so that no screams would be heard. He carried a double-edged blade mounted on his forearm, wore heavy armor, and relied on a Kanoka launcher equipped with freeze disks.3

Silence killed Brotherhood of Makuta members as well as those working for them.4