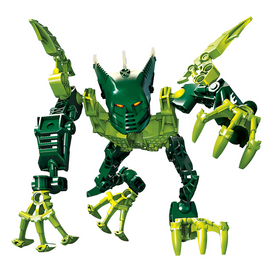 Tarduk was an adventurous and brave Agori from Tesara. He was a treasure-hunter and historian. He had a passion for knowledge and would go almost anywhere to learn something new, particularly if it was about Bara Magna's past. This resulted in some amazing discoveries, but also put Tarduk's life at risk more than once. Like the rest of the Tesara Agori, Tarduk used his forelimbs as an extra pair of legs and was extremely agile and a great climber. He also proved himself to be quite intelligent and determined and a good leader in a crisis. Tarduk used the claws on his hands and feet to defend himself and also had blades mounted on his armor.1

Tarduk was an explorer, with a love of finding ancient artifacts buried in the sand. He used his claws and sharp spikes to climb or defend himself in battle.2

Berix formed a close friendship with an Agori from Tesara, Tarduk, since both liked to search through ruins for ancient items.3, 4

Tarduk searched for old items buried in the sand left over from the days when civilization on Bara Magna was more advanced.6