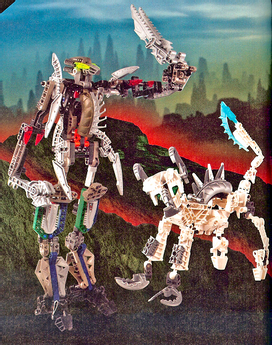 Tracker was a Dark Hunter1 who, along with his pet bull, was extremely skilled at hunting down quarry. His most notable accomplishment was finding Roodaka after her apparent death at the hands of the Toa Hordika.2

Tracker, as he was code-named, had a murky background, since he was given to changing the story of his origin from time to time. At times he blamed Visorak venom for mutating him, and at others he blamed Roodaka's mutation spinner. Whatever the cause, he had a deep hatred of the Visorak branch of the Brotherhood of Makuta's army, which the Shadowed One put to use. Tracker and his pet bull were skilled at hunting down targets. Given the slightest scent of a target or even an object once handled by them, he could find that being no matter where he or she tried to hide. Tracker also possessed tremendous strength. The horns of his pet bull were able to dissolve solid matter upon contact.3

Perhaps Tracker's most impressive accomplishment was tracking down Roodaka after her supposed death in Metru Nui.3

As of story year 2006, Tracker was employed seeking out a renegade Brotherhood of Makuta member who was hiding from both his former comrades and the Dark Hunters.3

Tracker's pet bull was a Rahi.4