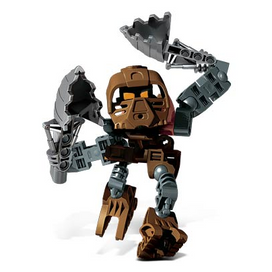 Velika was a Po-Matoran1 member of the Matoran Resistance on Voya Nui.2, 3 He was a skilled inventor known for speaking in complex riddles. He carried twin power carvers.3

Velika was a Po-Matoran who made most of the more complex devices used by the Matoran resistance on Voya Nui. He spoke in riddles and epigrams, which drove some of the others crazy. He carried twin power carvers.4

Velika was an eccentric Po-Matoran member of the Matoran Resistance. Velika was always known for his habit of always speaking in riddles and metaphors. A skilled engineer, he created the zamor sphere launchers carried by the Toa Inika as well as the energized protodermis-filled zamor spheres they used. He carried twin power carvers.5

Velika, along with Balta, was an inventor.7

Balta and Velika invented weaponry for the Resistance.8

Velika was the disguised Great Being. He was already named Velika before inhabiting the Matoran body.9

Although Velika (that is, a version who was not a Great Being in disguise) transformed into a Toa in the alternate universe of the Kingdom, the Velika in the main universe was not able to turn into a Toa. The artificial intelligence of a Matoran played a role in his or her transformation into a Toa, since it had to change in certain ways, as well as to enable the Toa to control Great Masks, wield elemental powers, and so on. If the artificial intelligence was switched out, as in Velika's case, then transformation into a Toa was not possible.11

If Velika's plans were to succeed, he would have created a very ordered society where his word was law, and there were consequences for not going along with it. It would not have been like Makuta's rule, where people were wantonly killed on a whim. Velika would have seen himself as a firm father figure, seeing the Matoran and Agori as children who could not be trusted to make their own decisions. His idea was to have the Great Beings take a firmer hand, believing that they knew best and that everyone should just have done what they said.12