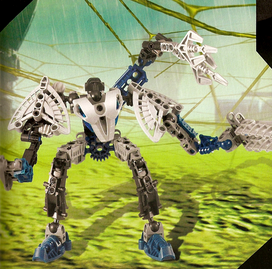 Amphibax was an amphibious Dark Hunter who specialized in aquatic missions, considered by the Shadowed One to be one of his most effective operatives. Before joining the Dark Hunters, Amphibax was once a member of Ehlek's army but became a drifter after the army was disbanded. During the Dark Hunter-Brotherhood of Makuta War, Amphibax's primary occupation was raiding Brotherhood of Makuta vessels and the coastlines of Matoran-held islands.

Amphibax was a sleek, amphibious being. He was the Shadowed One's first choice for all underwater operations and was one of his most effective operatives. Amphibax combined the cunning of a natural predator, the intelligence of a thief, and the savagery of a Takea shark.1

Before joining the Dark Hunters, Amphibax was a wanderer beneath the waves. He had a missing hand. The Shadowed One did not know why he had been forced to live this way, speculating he had been exiled by some undersea land that had tired of his brutality.1

The Shadowed One used Amphibax to strike at Brotherhood of Makuta vessels and raid the coastlines of Matoran islands. Even the rumor that he was in an area was enough to bring all seagoing traffic to a halt, making even his reputation a formidable weapon.1

Amphibax had long, sharp claws on one hand and a spiny whip in place of the other. He was an extremely powerful swimmer and was able to survive at great depths for extended periods of time. On land, he was a swift runner and a powerful tree climber. He wad heightened senses of hearing and sight.1

As of story year 2006, Amphibax was off the coast of Voya Nui, keeping track of events there.1

Amphibax was an amphibious Dark Hunter2 whose primary occupation was raiding Brotherhood of Makuta vessels and the coastlines of Matoran-held islands. His weapons were sharp claws on one hand and a spiny whip in place of the other hand. He was a skilled swimmer, runner, and tree-climber. He was, at one time, a member of Ehlek's army, and was rumored to have lost his hand in a futile attempt to search for, and rescue, his leader after the failed rebellion against Mata Nui.3

Amphibax was originally a member of Ehlek's army prior to Ehlek's exile to the Pit.4

Amphibax was a real name, not his Dark Hunter codename.5, 6