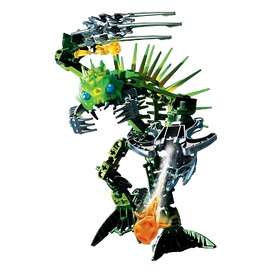 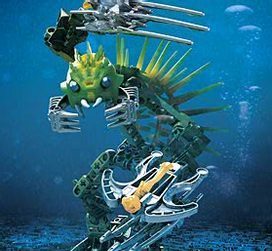 Ehlek was one of the six Barraki. He was native to the waters beneath Zakaz and had to wear a complicated apparatus to breathe on land. He carried a squid launcher, and his sharp spines could give off an electric charge.3

Ehlek was the only member of the original Barraki alliance who was a native water-breather, from the liquid protodermis sea around the island of Zakaz. After the Great Cataclysm and escape from the Pit, he built a fortress for the Barraki, which was destroyed when Mahri Nui landed on top of it. Ehlek was angry, bitter, and hungry for revenge, almost willing to sacrifice the Mask of Life if it would mean exterminating all Matoran. Although slim and poorly armored, the spines on his back gave off electric bolts that could stun or kill. He commanded an army of venom eels. His weapons were a squid launcher and tri-talons that could tear through protosteel. His power was the ability to emit electric bolts from his spines.4

The Dark Hunter Amphibax was originally a member of Ehlek's army prior to Ehlek's exile to the Pit.4

Ehlek's species was tampered with by the Order of Mata Nui in an attempt to engineer a race specially designed to combat the Brotherhood of Makuta.4

Of all the Barraki, Ehlek had the deepest hatred of Matoran. With his electrified spikes, sharp claws, vicious nature, and army of venom eels, Ehlek was as unpredictable as he was dangerous. His weapon was a squid launcher, and his natural tools were protosteel claws and electric spikes.1

The bulk of Ehlek's undersea army was made up of venom eels.5

Ehlek was the most mysterious of the Barraki. Ehlek was also the only Barraki whose species was native to under the sea. His alien nature always made him feel set apart from the other Barraki. Ehlek carried a squid launcher and was capable of producing electric bolts to jolt his enemies.6

Ehlek was a native water being.7

Ehlek's pre-banishment army was more unique than the other Barraki's because his tended to have more members of his own species in it.8

Ehlek's pre-banishment army wasn't more restricted than the other Barraki's due to the fact that he was a water breather because his armies used the same tech he used.9

Ehlek had more of his own species in his army than the other Barraki did because he felt more comfortable with water-breathers than air-breathers, who he didn't feel he had much in common with.10

Ehlek could only fire electric bolts from close range, not from long range.11

Ehlek used his electricity powers underwater the same way an electric eel would.12

Ehlek was not immune to mutagen.13

After mutating, Ehlek looked nothing like he did before his mutation, nor did he look how he did before being tampered with by the Order of Mata Nui.14

Ehlek had to wear a complex apparatus to breathe on land.15, 16

Ehlek's claws were grafted onto him.17

Ehlek was strong enough to break Brotherhood of Makuta armor with his protosteel claws.19

Ehlek wasn't particularly dumb. He was smarter than Carapar in story year 2007.21

Ehlek prioritized revenge on the Matoran of Mahri Nui over retrieving the Mask of Life.22

“Ah, Barraki,” Brutaka replied. “You were important once, weren’t you, a long time back? No matter – you’ll answer to me now.”

“As long as the question is ‘Who’s that killing me?’” Carapar shot back. “Then we should get along fine.”

“I came from the island of Voya Nui,” Brutaka continued, ignoring Carapar. “I was there to guard the Mask of Life, but I decided it would be better put to use in my service. My fellow guardian, Axonn, disagreed – and he had the stronger argument. When I woke up, I was underwater. I swam until I found a hole and eventually wound up here.”

“The Mask of Life,” said Ehlek. He went on to describe the mask that Carapar claimed was in the possession of the Matoran.

Brutaka’s eyes brightened. “That’s it. It’s here! Amazing … fate must want me to have it, there’s no other explanation. And once I do … Axonn and I will resume our discussion. Take me to the mask – now!”

Carapar started to object, but Ehlek cut him off. “Of course, of course. Only we have a little problem reaching it at the moment – actually, a 300-foot long problem. But maybe you can help with that?”

“You may have a bigger problem than that,” Brutaka answered. “If I am here … and more importantly, the Mask of Life is here … then Toa are not far behind.”4