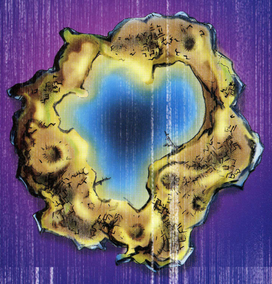 Zakaz was the home island of the Skakdi. It was a war-torn, devastated land, with various Skakdi factions perpetually at war with one another.3

Up until some 75,000 years ago, Zakaz was home to the thriving Skakdi civilization. Zakaz was once a green and lush land. In ancient times, it was home to many beautiful and advanced cities, a sophisticated transportation network, and abundant resources. Although its native inhabitants, the Skakdi, were not particularly friendly or trustworthy, they generally managed to live in peace among themselves and with their neighbors.4

Zakaz later became a monument to senseless destruction, known only for its rubble and ruins, constant warfare, and the perpetual haze of black smoke from countless fires. Where once crops grew, only a barren and blasted landscape remained. Trees were felled and rocks mined to build fortresses, which would be destroyed in a matter of days or weeks. Resources such as water and food were scarce. Every settlement, from the smallest village to the largest city, was at war on Zakaz, and consequently few remained standing. A surprising number of Skakdi survived, living among the ruins. A Skakdi who commanded a place where only a few stones remained stacked together was considered a force to be reckoned with. Most Skakdi lived out their entire lives and perished on Zakaz. A few managed to leave the island by recruitment into the Dark Hunters. Their power made them attractive as troops or enforcers, but their reputation for treachery implied great risk in hiring them.4

Unwanted everywhere else they could possibly settle, the inhabitants of Zakaz were unable to leave their war-torn island. The residents of Zakaz made a few attempts to invade and conquer other islands but were beaten back by Toa. Although the inhabitants of Zakaz appeared to be at blame for destroying their land, the dark and tragic truth was that the Brotherhood of Makuta ultimately caused the collapse of its civilization. The Order of Mata Nui later regretted entrusting the island's security to the Brotherhood of Makuta instead of intervening when they had the chance.4

The Brotherhood of Makuta forbid travel to Zakaz. On this matter, the Order of Mata Nui agreed. Zakaz had a jagged coastline with no working sea ports left. Those who foolishly ventured too close to shore often had their boats plundered and then sunk. Therefore, travel by airship was more practical. However, robotic nektann placed at key points all over the island were trained to blast unauthorized aircraft out of the sky. Only the Dark Hunters ever risked traveling to Zakaz.4

Zakaz was located just south of the realm of Karzahni, several days' travel away from Metru Nui.4

Zakaz was quarantined by the Brotherhood of Makuta. Only the Dark Hunters ever ventured there. At the time of the Toa Mahri's mission in the Pit, it was home to scattered hordes of the native Skakdi fighting over ruins.5

Stone rats were a pest on Zakaz.7

The famed necrofinch of the Zakaz mountains continued to sing even after it was dead.7

Nektann once threatened to throw Axonn and Brutaka into the Tahtorak pens.7

Zakaz was located in the northern section of the Matoran universe, situated between Karzahni to the north, the northern continent to the southwest, and Xia to the east.8

Krika was Spiriah's replacement as Makuta of Zakaz, adopting it in addition to his own territory.1

Reidak came from a small island off the coast of Zakaz. After Reidak destroyed the civilization there and joined the Dark Hunters, no one lived there anymore.10 Before its destruction, it was one of the few settlements still standing in Zakaz.11

Zakaz was a very violent place.13

Ehlek's species lived in cities under the sea around Zakaz.14

There were other islands in the region that contained Zakaz.15

The Makuta sealed off Zakaz by making it known that anyone going there would be in a lot of trouble, and dispatching their agents to keep an eye on the place.16

It is highly doubtful there was an Order of Mata Nui agent on Zakaz.17