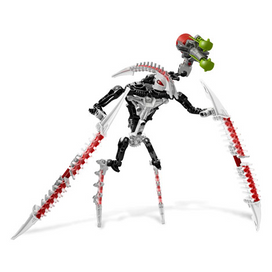 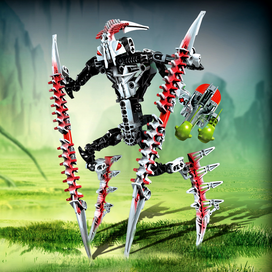 Krika was always a reluctant part of Teridax's great plan. When he pondered the future, he saw nothing but destruction. Either the Toa would win and the Brotherhood would be wiped out, or the Makuta would win – but he doubted that would lead to happiness. Deep down he felt that rule by the Brotherhood would somehow lead to nothing but fear and death. Still, he did not believe there was much he could do against the might of Teridax and his loyal followers. He obediently took place in the Karda Nui mission, but as the mission continued, his doubts grew. Krika was trapped in an insectoid form by the power of the swamp waters. He was able to change his density so that he could pass through solid matter, but if he did not absorb energy from other beings or the world around him, he would become permanently ghostly. He carried a Nynrah ghost blaster. He wore the Kanohi Crast, the Mask of Repulsion. This mask could repel anything Krika chose, even the ground, which allowed him to fly.1

Leader of the Mistika Makuta, Krika struck from the mist like a phantom, appearing and disappearing at will. His Kanohi Crast, the Mask of Repulsion, allowed him to hurl anything away from himself at high speed.2

In the alternate universe of the Toa Empire, Krika had black armor. He was tall, with armor lined with short, curved, and very sharp blades.3

Krika was Spiriah's replacement as Makuta of Zakaz, adopting it in addition to his own territory.4

Krika was the Makuta of the northern part of the northern continent (Gorast oversaw the Tren Krom Peninsula in the south), which allowed him to oversee nearby Zakaz relatively easily after Spiriah's exile.5

Krika suspected that Teridax would betray the rest of the Makuta.6

Krika did not have a Toa Hagah team.7