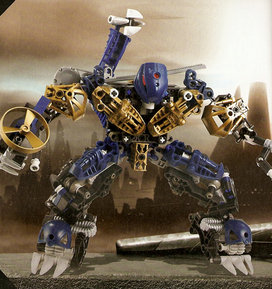 Ancient had great strength and powerful armor that was impenetrable to most physical attacks. His boots were fitted with levitation disks, activated by stomping on the ground, which allowed him to rise into the air. He carried an upgraded Rhotuka launcher capable of rapid fire. His Rhotuka spinners robbed targets of all physical coordination. He remained an effective enforcer and mercenary despite his advanced age.2

As of story year 2006, Ancient was teamed with Voporak in a search for the Mask of Time.2

Ancient was a Dark Hunter3. He was a veteran warrior who, along with the Shadowed One, formed the Dark Hunters. He later served as one of the Shadowed One's most trusted operatives. In addition to his great strength and formidable armor, he possessed boots fitted with levitation disks that enabled him to rise into the air. His modified Rhotuka spinner robbed targets of all physical coordination.4

Ancient was Toa Helryx's spy within the Dark Hunters.5

The Shadowed One and another member of his species known only as "Ancient" founded the Dark Hunter group.6

Ancient was never part of the Hand of Artakha.7

Ancient probably didn't know the Shadowed One's true name, nor did he care.8

Were he to die, the Shadowed One would have chosen Ancient to lead the Dark Hunters in his place.9