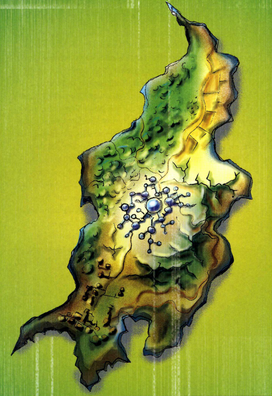 Artakha was a place of peace and contentment for all Matoran. Its location had never been discovered, and many Matoran believed it to be a myth. The first mention of Artakha was in an ancient legend which spoke of a trouble-free site to which skilled Matoran workers were allowed to migrate.1

At one time, an isthmus connected Artakha to a larger, uninhabited island, and both islands were marked on various maps and charts. Various members of the Order of Mata Nui and servants of the Brotherhood of Makuta all knew Artakha's location. After the Brotherhood of Makuta's raid on Artakha, the Order of Mata Nui eliminated all known maps or individuals capable of locating Artakha, including their own. The inhabitants of Artakha destroyed the other island and the isthmus leading there. After this time, no outsider knew how to reach Artakha. Although it was possible that some individuals remained who knew Artakha's location, they wisely kept silent.2

The island of Artakha frequently changed its appearance. Its topography, plant life, and some aspects of its climate changed seemingly at random. Artakha the ruler could alter the island at will to give whatever impression he wished.2

Artakha was situated well away from other populated lands.2

The Matoran who lived on Artakha were perhaps the most content in the Matoran universe. They worked in peace with all of the materials and tools they could ever want. They did interesting work which contributed to the greater good. Although they lived far removed from other populated lands, visitors from other places kept them informed about the outside world.2

Artakha was home to the four crystal serpents, which separately occupied the northern, eastern, southern, and western sections of the island. Although dormant most of the time, they awoke to feed every couple of centuries. Although they did not prefer to eat Matoran, the Matoran considered it wise to avoid the crystal serpents when they were active.2

Artakha was built by Matoran.3

Artakha was located in the western shoulder of the Matoran universe, to the west of the northern continent.4

Artakha remained hidden because it appeared like any other island, so seeing it was not necessarily identifying it.5

Artakha was a potentially mythical land where Matoran could "work in the light" without fear of any harm coming to them. According to legend, Matoran workers who excelled were allowed to go there, but no outside Matoran remembered if it really existed or where it was.6

Turaga were the ones who sent Matoran to Artakha.7

When Matoran were sent to Artakha, their reassignment was permanent.8

There was only one Makuta of Artakha.9

Artakha was an island on an ocean.10

Artakha was somewhat damaged by the Great Cataclysm, primarily Artakha's fortress. Being crafters by nature, the locals repaired it some time before story year 2008.11