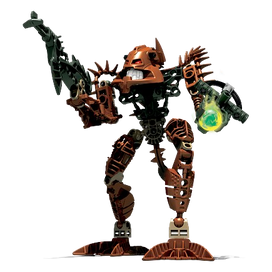 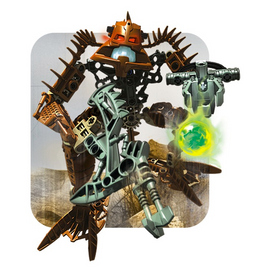 Avak was a Dark Hunter2 and later one of the six Piraka.3

Avak, "the Trigger," was the inventor and engineer for the Piraka. Avak could make a machine or weapon out of almost anything. With his X-ray and telescopic vision, few could hide from him. He had the ability to conjure a prison from thin air that would counter the powers of any living foe. He carried a zamor sphere launcher and a dual weapon with a seismic pickaxe on one end and a jackhammer on the other.4

The Shadowed One considered Avak to be a discontented tinkerer and planned to have his hands removed when captured for his defection.5

Avak had the ability to create from thin air a prison capable of holding any being. He was extremely skilled at crafting equipment and weapons. He also had X-ray and telescopic vision, which made it easy for him to assemble and disassemble things. He carried a zamor sphere launcher and a dual weapon with a pick axe on one end and a jackhammer on the other.5

Avak went rogue and went to Voya Nui with the other Piraka.5

Avak was originally employed as a jailer on Zakaz, where he used his powers to imprison Dark Hunters, among others. Shortly after this, he was recruited into the Dark Hunters.6

Avak possessed the elemental power of stone, X-ray and telescopic vision, and the ability to create the perfect prison for any target out of thin air using only his mind. He carried a Zamor Sphere Launcher and a seismic pickaxe/jackhammer. Avak was a skilled inventor who designed the Zamor Sphere Launchers for his fellow Piraka.6

At some point, Dalu ambushed and defeated Avak. Later, Avak joined the other Piraka to battle the Toa Nuva and the Toa Inika.6

Avak remained on Voya Nui with other Piraka still scheming to get the Mask of Life. Unbeknownst to him, an earlier exposure to mutagenic seawater was beginning to affect his body.6

Avak was the engineer and jailer of the Piraka team. He was responsible for the construction of the zamor sphere launchers used in the invasion of Voya Nui. Ambitious and smart, he sensed from the start that something was not right with the Piraka's pursuit of the Mask of Life, although he never realized they were being influenced by Teridax. A poor hand-to-hand fighter, Avak only liked to go into battle with a tool or weapon in hand. Fortunately for him, he had the skill to make a weapon out of almost anything. Avak carried a zamor sphere launcher and a seismic pick axe/jackhammer combination. He had the ability to mentally bring into being a perfect prison for any opponent which could counter any powers he or she might try to use to escape. He also possessed elemental stone power which could only be used in combination with another Piraka, as well as X-ray and telescopic vision.7

Avak's weapon did not function as a gun.8

Avak spoke his mind. He didn't plot or scheme as much as he took direct action. He was not afraid to challenge Zaktan's leadership, even when doing so almost got him killed. Other Piraka sometimes used his willingness to confront Zaktan as a distraction to draw attention away from what they were doing.9

Avak didn't learn hand to hand combat because he didn't feel the need to given his prison power.10

Avak would have been able to create a cage capable of trapping a Kanohi Iden user's spirit.11

Avak's prisons were made up of anything, not necessarily what was in the air.13

Each of Avak's prisons was tailored specifically to its prisoner and their particular powerset.14

Avak's prisons depended on who he was imprisoning. Concentration was important in maintaining them.15

Avak was capable of imprisoning Reidak despite the latter's adaptive powers.16

Avak's cages are tailored to the prisoner's individual powers. They would not counter attacks from someone outside of the cage trying to free the prisoner.17

Avak did not need to know his opponent's weaknesses or plan his prisons to create them.19

Imprisoning multiple beings at once was really difficult for Avak because it required dividing his concentration.20

Avak would most likely be incapable of imprisoning the Ignika without destroying it because the only way to counter it was with death.21