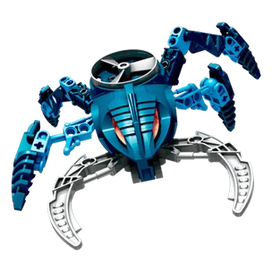 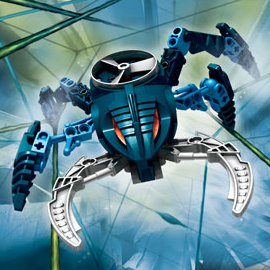 Boggarak were the only Visorak whose spinners contained two powers, which they could apparently switch back and forth at will. When used underwater, they caused a target to swell up and float to the surface. When used on land, they removed all moisture from a target, reducing it to a pile of dust. Boggarak were also able to create sonic hum that could transmute solid matter into gas.1

Boggarak were the only breed of Visorak able to operate on water and attack aquatic Rahi such as sea spiders.2

Boggarak were not strong swimmers but could skate atop water, speedily darting to and fro on its surface. They could emit a sonic hum which could transmute solid matter.3

Their Rhotuka had two powers. When used underwater, they caused their target to swell up and float helplessly to the surface. When used on land, they completely dehydrated their target, reducing it to dust.3

Roodaka's personal guard was made up of Boggarak. These Visorak decimated a squad of Vahki.3