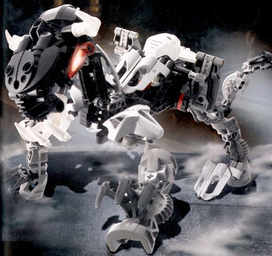 Fader bulls were large, bull-like Rahi known for their natural ability to teleport. They used their limited teleportation abilities to escape enemies, which made them one of the most difficult Rahi to capture. On Metru Nui, before the Great Cataclysm, large herds of fader bulls lived in Po-Metru, feeding off of its sparse vegetation. There is no mention of their presence on Mata Nui.

Fader bulls had considerable size and sharp horns, although they appeared as if they would make easy prey for predators such as Muaka. However, fader bulls were one of the most difficult Rahi to capture in all of Metru Nui, thanks to their ability to teleport to escape danger. No one knew where fader bulls originally came from or why they had the abilities they did. They appeared to have a natural power similar to that of a teleportation Kanoka disk. When threatened, fader bulls vanished, leaving only a ghostly afterimage of themselves that slowly faded away, and reappeared someplace well away from the threat. It was unknown to what extent fader bulls could control the distance and direction of their teleportation. Po-Matoran on occasion stumbled on fader bulls that had materialized inside rocks or other solid objects. Fader bulls were plant-eaters, surviving on the sparse vegetation that grew in the rocks of Po-Metru. They were herd Rahi, traveling in groups, and their sheer numbers made them destructive at times. Nevertheless, the Po-Matoran eventually learned to accept their presence; at any rate, they were hard-pressed to capture Rahi that could vanish at will.1

During the Morbuzakh attacks in Metru Nui, fader bulls helped keep some areas of Po-Metru safe by consuming its vines.1

During the Visorak invasion in Metru Nui, fader bulls' skill at escaping traps made them a source of constant frustration for the Visorak.1

To capture fader bulls, Pouks exploited the Rahi's herd mentality. His recommendation was to rig up a rock slide to scare a herd of fader bulls, then to keep an eye out for the first fader bull to vanish and reappear. This would allow him to rush over to the herd's new location in time to catch the third or fourth fader bull as it reappeared.1

The fader bull was an herbivorous Rahi breed from Po-Metru capable of limited teleportation for escaping enemies.2