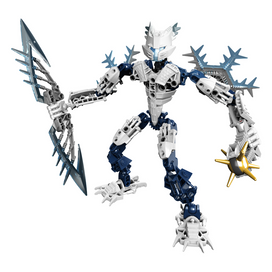 Gelu was the former Second Glatorian of the ice village of Iconox. Prior to the Shattering, he was a reluctant warrior in the Core War. Gelu saw what the conflict was doing to the land and decided he wanted no part of it. He deserted and headed south into the White Quartz Mountains, only to have the war follow him there. During a major battle, his best friend, Surel, was badly wounded and believed to be dead. Although Gelu searched for him, he never learned that Surel had in fact survived. Gelu received arena fighter training from the legendary Certavus. As a Glatorian, Gelu was skillful and effective, but he saw it as just a job. He wanted to win, but he had no real interest in becoming a tournament champion or going down in history as a great fighter. All he wanted was to serve his village and live comfortably as a result. If he had been more ambitious, he probably would have become Prime Glatorian in place of Strakk at some point in recent years. Following the Skrall attack on Atero, Gelu saw a need for armed guards to escort Agori across the hostile desert. He retired from being a Glatorian and started his own business as a guard for hire. It was a much more dangerous job than being a Glatorian; unlike the arena, fights in the desert were often to the death. However, it was also much more profitable. He quickly acquired a reputation for dedication to his job, always putting the lives and safety of his clients before his own. Gelu carried a Thornax launcher and an ice slicer.2

Gelu walked away from his job as a Glatorian for the dangerous work of armed escort to traders. He used his ice slicer and spiked Thornax launcher to battle Skrall, bone hunters, and desert creatures to save innocent lives.3