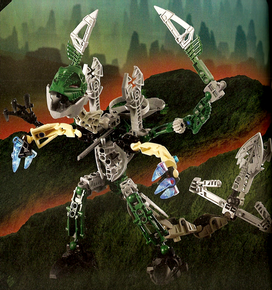 The Hordika Dragons were eight Dark Hunters1 transformed by Visorak venom into lizard-like beasts. They had natural strength and agility, as well as an electric charge which flowed through their claws. The Shadowed One used them primarily as debt collectors.2

The Hordika Dragons had enhanced strength, agility, and tracking sense. They also had a natural electric charge that flowed through their claws. This power could be turned on and off at will and allowed them to electrocute anything they touched.3

All Hordika Dragons were of the same species.4