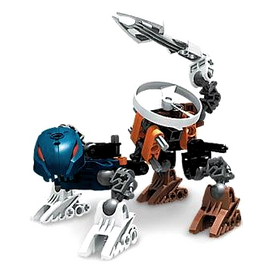 Ice vermin were small Rahi which became serious threats to Metru Nui after the earthquake caused by the Great Cataclysm. In some strange way, their Rhotuka spinners absorbed the seismic energy of the quake. They were able to use them to cause earth tremors or make enemies shake apart.1

Although its name would tend to associate it with Ko-Metru, in truth, Ice Vermin could be found everywhere in Metru Nui. Though no real threat before story year 2005, since the fall of Metru Nui, they had begun to attack larger creatures in packs. Their spinners appeared to have, in some way, absorbed energy from the quake, so that they could now cause targets to literally shake themselves apart.2

Ice vermin were found throughout all of Metru Nui. Before the Great Cataclysm, ice vermin were no real threat. However, after the great quake, they began attacking larger creatures in packs. Their spinners appeared to have in some way absorbed energy from the quake so that they could cause targets to shake apart. With their increased presence in the city after the cataclysm, they clashed not only with Visorak, but also with Kavinika and stone rats, which weakened all sides and made them easier prey for the Visorak. Additionally, the constant use of their spinners caused even greater damage to Metru Nui. Many ice vermin accidentally buried themselves under rubble due to tremors of their own making.3

During the Visorak invasion in Metru Nui, Whenua stated that capturing ice vermin needed to be a priority because of the significant damage they could do to the city and because of the possibility of their mutation by the Visorak into something worse. Bomonga remarked that ice vermin were easy to find, even in the dark, because of the tremors they caused; the only hard part of capturing them was to keep them from bringing down buildings.3