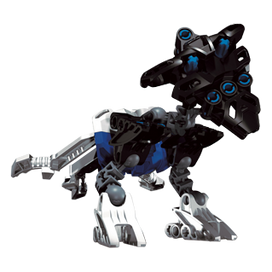 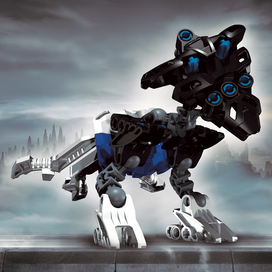 Kavinika were wolf-like Rahi originally used as guards at some Matoran facilities in Metru Nui. Their violent natures made them too dangerous, and Turaga Dume banned them from the city. Efforts to drive them out of the city met with failure. Strangely, their population actually seemed to increase after the Great Cataclysm. The Rahaga believed that something in one of the Ga-Metru labs caused the Rahi to duplicate. Kavinika made their way to Mata Nui, surviving in the depths of the Le-Wahi jungle.1

Kavinika were wolf-like creatures who were originally intended as guards for low-priority facilities in Metru Nui. Unfortunately, their nature was such that they would fight each other, Ussal crabs, and other Rahi. They even threatened their Matoran masters. As a result, efforts were made to drive them out of the city, although with limited success as of story year 2004.2

Kavinika were wolf-like creatures. When they were branded a pest in Po-Metru, Ga-Matoran adopted them for use as guard Rahi at lesser temples and protodermis labs. The Kavinika proved so short-tempered and ferocious that the experiment was deemed a failure. The Ga-Matoran tried to drive the Kavinika out, but some still roamed around the outskirts of the metru as of story year 2004.3

During the Visorak invasion of Metru Nui, the increased presence of ice vermin in the city led to clashes with Kavinika, weakening both sides and making them easier prey for the Visorak.4

Kavinika's main tools were their claws and teeth. They were also adept climbers.5

On Metru Nui, Kavinika dwelled in Ga-Metru. They had been driven out of Po-Metru ages before, then adopted by the Ga-Matoran and used as guards at low-priority facilities. However, their nature proved so aggressive that they would attack innocents and even each other. Efforts to drive them away from the schools and protodermis labs largely failed.5

After the Great Cataclysm, packs of the wolf-like Kavinika prowled all around the outskirts of Ga-Metru. With the Matoran gone, Kavinika ruled the night in Ga-Metru. They scaled buildings and hid in the shadows to spring on any who passed below. The Visorak learned to use this characteristic against them: often, one Visorak would be sent to bait a Kavinika while the rest of the horde remained in hiding, waiting to ambush it. Strangely, at this time the Kavinika's population actually seemed to be increasing. It was theorized that something in one of the Ga-Metru labs was causing them to duplicate in some mysterious manner. This gave them some safety in numbers, and also made Ga-Metru an even more dangerous place to wander.5

Iruini remarked that trying to grab a Kavinika off its perch was extremely dangerous. He noted that after dealing with the Visorak, they would still need to figure out how to pen up the Kavinika and find out why their population was growing before Metru Nui was overrun.5