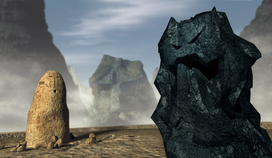 The island of Mata Nui was once a paradise, until the entity known as Makuta arrived, transforming it into a land of darkness and evil. The natives, called Tohunga [sic], and their leaders, the Turaga, waited and hoped for heroes who would conquer Makuta and save their home.1

The tale of Mata Nui was told for many years as follows. In the time before time, when the world was new, the Great Spirit Mata Nui descended from the skies like a burning star. He walked the world and marveled at its beauty and watched over all living things. However, Mata Nui had been followed by his brother, the dark spirit Makuta. Makuta coveted the world and all that his brother had. Makuta cast a spell that made Mata Nui sleep. Then Makuta claimed the world, and darkness and death were everywhere. Yet all was not lost. The Great Beings sent six mighty heroes, the Toa, to Mata Nui. They were six heroes with one destiny: to defeat Makuta and save their world.2

The island of Mata Nui was once a paradise, a place of peace and happiness. Then Makuta came, bringing darkness to the land. It seemed that all was lost, until the Toa, six mighty heroes of legend, appeared: Tahu, Toa of Fire; Pohatu, Toa of Stone; Onua, Toa of Earth; Lewa, Toa of Air; Kopaka, Toa of Ice; and Gali, Toa of Water.3

The Turaga said all along that the Toa were six who shared one destiny, implying that they were meant to work together.4

On the island of Mata Nui, legends said that in the time before time, Mata Nui brought his people, the Matoran, to an island paradise. The Matoran lived happily under his loving protection. They even named the island Mata Nui, in his honor. However, a shadow soon fell over the land. Mata Nui had a powerful brother, Makuta. Makuta was jealous of Mata Nui and all he created. He cast a spell that made his brother, Mata Nui, fall into a deep sleep. Then Makuta took power over the land. Fields withered away, sunlight grew cold, and the ancient values of the Matoran were gradually forgotten. Still, all hope was not lost. Legends spoke of six mighty heroes, called the Toa. According to legend, the Toa would arrive to rescue the island and its people from darkness.5

The story as told on the island of Mata Nui is as follows. In the time before time, the Great Spirit descended from the heavens, carrying the Matoran to an island paradise. The Matoran were separate and without purpose, so the Great Spirit blessed them with three virtues: unity, duty, and destiny. The Matoran embraced these gifts and, in gratitude, named their island home Mata Nui, after the Great Spirit himself. However, their happiness was not to last. Mata Nui's brother, Makuta, was jealous of these honors and betrayed him. Makuta cast a spell over Mata Nui, who fell into a deep slumber. Makuta's power dominated the land, as fields withered away, sunlight grew cold, and ancient values were forgotten. Still, all hope was not lost. Legends told of six mighty heroes, the Toa, who would arrive to save Mata Nui. The Toa were great warriors with great power, drawn from the very elements themselves. Together, they were six heroes with one destiny: to defeat Makuta and save Mata Nui.6, 7, 8, 9

The Turaga's legends said that when the Toa arrived, they would remember very little. It was said that only the Toa had the power to stand against Makuta. It was not certain that the Toa's quest would succeed, only that it was their duty to try.6

The great hero Toa Tahu had been foretold through legends long before he and the other five Toa ever appeared on the lush tropical island of Mata Nui.10

The prophecies said that the Toa had to work together.9

The "Paradise" from which Mata Nui came actually referred to Spherus Magna.11

The Toa Mata served as a failsafe. The knowledge that there were such failsafes in the Matoran universe was not a huge secret, but over time that knowledge devolved into being seen as prophecy, which is how the Turaga knew about them.12