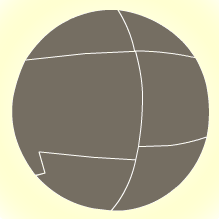 Split into six fragments by the Dark Hunters

The Makoki Stones were six stone fragments used by the Rahaga as a key to unlock the hiding place of the Avohkii in the Archives. Later, they were collected by the Toa Mata shortly after their arrival on Mata Nui. Fitted together, the stones formed a key that opened a passage from Kini-Nui to Makuta's lair.1

The Makoki Stones had a complicated history. Originally they were all part of one tablet and contained secret inscriptions detailing information about the Brotherhood of Makuta. The tablet was guarded in a Toa tower but stolen by Vezok.1

Makoki was the Matoran word for "key." Although the Makoki stone's rough surface looked relatively clean, if one looked close enough, it was possible to see very faint, almost microscopically small scratches on it. They seemed so random that even if someone spotted them, they would appear to be simply the result of normal wear. In fact, these scratches were a form of writing which resembled modern Matoran (as of 7,000 years ago) but was just different enough to be almost indecipherable. The writing was a record of the Brotherhood of Makuta, including entries on all their members and the locations of their fortresses. When Vezok first found the Makoki stone, the Brotherhood of Makuta was believed to be one of the most benevolent and powerful organizations in the universe. It was apparent that the Toa guarding it did not trust the Brotherhood and were gathering information against the possibility that the Brotherhood would one day betray them. Vezok surmised that for this reason, the Makoki stone was indeed a kind of "key." In fact, Vezok believed that it might have served as a conventional key to open some lock somewhere – a clever distraction to others from its true nature.2

The Makoki stone was an artifact of great value. Although it looked like just another stone tablet, it was inscribed with secret information about the Brotherhood of Makuta.3

The Makoki stones were a form of key, but were something else before being broken apart.4

The Makoki stone was important because it had inscriptions that gave a detailed report on the strengths and weaknesses of the Brotherhood of Makuta in addition to serving as a key to a number of places, including Kini-Nui.5