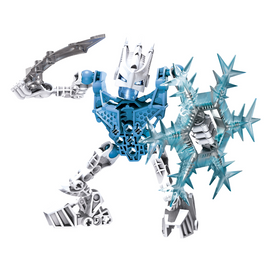 Transformed by Mask of LifeTransformation worn off

Metus was a fight promoter and a trainer of Glatorian based in the village of Iconox. Although the ice village was his home, he was rarely there. Metus spent most of his time traveling between villages, setting up Glatorian matches and recruiting new fighters. Metus had been everywhere and seen it all, and very little could surprise him anymore. An Agori of the ice tribe, he was with the last group that migrated south to the eventual site of Iconox. During the Core War, Metus worked in an ice tribe training camp, helping to prepare warriors for battle. This made teaching Glatorian to fight easy for him later on. From training fighters, it was a natural next step to arranging matches. The Glatorian system was complicated. Villages had to make sure that they did not wear their fighters out by scheduling matches too close to each other, along with making sure they matched their best fighter up with the opposing village's best fighter. This kind of coordination took a lot of work and time, and most Agori did not have it to spare. More and more, they started turning to Metus to set up matches as needed. Although there were other Agori who did this work (just about every village had someone), none were as good at it as Metus. He was sharp, persistent, but fair and generally honest. He made no secret of the fact that he was trying to make the best deal he could for his village, and others respected him for that. Metus became one of the few Agori who worked for villages other than his own. If Vulcanus needed a new Glatorian, they would turn to him. If Tesara felt that Gresh needed more training, Metus would step in to help out. Metus carried an ice axe and shield.2

Metus was an experienced recruiter and trainer of Glatorian, and it was said that Metus could talk the wings off a sand bat. He was always on the lookout for a new fighter for the arena.3

Metus was of the Ice Tribe. He was located in Iconox and later Roxtus. He carried an ice axe [sic] and shield.1

Metus was a fight promoter and a trainer of Glatorian based in the village of Iconox. Unlike many other Agori, Metus spent little time in his village. He was often traveling through the desert, going to other villages to set up matches or looking for new fighters to recruit.1

Metus was deceitful, ambitious, and ruthless. He was convinced that the Skrall would win in a war with the Agori and wanted to be on the winning side. Trusted by the leaders of every village, it was easy for him to gather information and then pass it on to the Skrall and bone hunters.1

Metus trained a number of Glatorian, including Strakk, as well as fighters from other villages.1

The ice Agori in Iconox had made a name for themselves as Glatorian trainers and match promoters, and Metus was the most successful of these.4

Metus's shield probably belonged to one of the Glatorian he trained and was given to him as payment.5