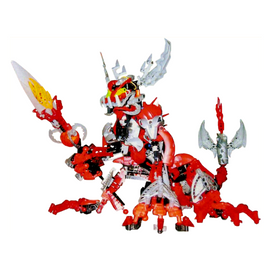 Miserix was the leader of the Brotherhood of Makuta before [Teridax]. He was overthrown and wound up imprisoned on the volcanic island of Artidax, guarded by Rahi and probably other things designed to kill an escaping Makuta. Spiriah was once unable to control a swarm of insect Rahi because Miserix already controlled them and had a stronger will.1

Miserix was known for shapeshifting into exceedingly nasty reptilian creatures.2

When Brutaka's team found Miserix, he appeared as a massive dragon-like beast chained to the stone floor. All around him flew klakk, dodging the shadow hand that occasionally shot out from Miserix's chest. Miserix was about 40 feet tall, colored red and silver, and had four legs, a tail, and a nasty disposition. When he spoke, his voice sounded like a distant avalanche. He had a crimson-scaled head. Once he was freed from Artidax, he grew wings so he could fly away.1

Over time, Miserix absorbed enough of the klakk flying around him to reach a size such that their sonic screams no longer caused him pain. Miserix had not seen another Makuta since Krika imprisoned him on Artidax.1

When Miserix visited the trader on Stelt, he appeared as a 20 foot-tall dragon. He scooped up the trader in a great claw.3

Miserix considered Teridax a pretender to power and displayed no doubt that he could easily defeat him. Miserix was brutally straightforward in expressing what he wanted and was quick to make threats to get it. He regarded less powerful beings like the Toa Hagah as if they were hardly worth his time.4

Miserix did not have a team of Toa Hagah.5

As of the end of the story, Miserix was the only Makuta left besides the alternate Teridax.6

Miserix was extremely intelligent, and more cautious than Teridax.8

Miserix had the same abilities as the other Makuta.9

Miserix didn't battle, he ordered other people to battle.10