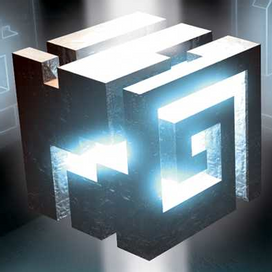 The Nuva Cube was a floating, cube-shaped object that served as the lock to the Bahrag's cage. It could either be opened by using the six Nuva Symbols or destroyed by the power of six Toa of the proper elements striking at once.2

This strange cube was the key to the Toa Nuva's power.3

The Bohrok-Kal discovered that a floating cube served as the lock on the Bahrag's prison, and that the six Toa Nuva symbols were the key that could free the Bohrok queens.4

This glowing cube hovered in front of the dark cavern where the Bahrag's prison lay. It had shapes carved into each side, a perfect fit for the Toa Nuva's symbols. The Bohrok-Kal needed the icons in order to place them onto the cube and release the Bahrag, as the cube acted as a kind of lock.5

The Nuva Cube was created by Artakha and teleported to the Bohrok nest when the Toa Mata formed the Toa seal around the Bahrag. The cube had the power to break that seal, but only that specific seal. It distinguished this particular seal by picking up a combination of the seal's energy and the Bahrag's energy.1

It did not generate the Toa Nuva's energy, but it was tied into it. The cube was like a lock for the Bahrag's protodermis cage. Fitting the symbols on the cube would open the lock and dissolve the protodermis cage.6

Activating the Nuva cube was only part of the process to unlock a Toa seal. This process was dangerous for beings who weren't Toa.7