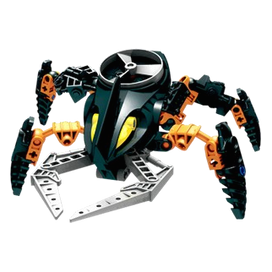 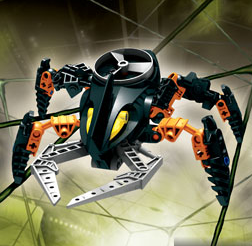 Oohnorak were one of the six Visorak breeds which invaded Metru Nui. Oohnorak had limited telepathic abilities and were skilled mimics, enabling them to trap a foe by speaking in the voice of a trusted friend. Their Rhotuka spinners were capable of numbing a target, making escape extremely difficult.1

The most devious of the Visorak, Oohnorak could use their limited telepathy and ability to mimic to lure a foe into a trap by imitating the voice of a trusted friend. Its Rhotuka spinner paralyzed or numbed an enemy, making it impossible for them to flee. Extremely strong, Oohnorak were used as living battering rams by the hordes.2

Oohnorak were followers rather than leaders. These Visorak were often used as a living ram when the mechanical Visorak battle rams were not available. Their spinner numbed a foe, making escape impossible. They had limited telepathic abilities and were skilled mimics, often imitating a trusted voice to lure a foe into a trap.3