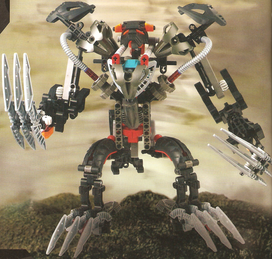 Voluntary merging combined with forced merging by Spear of Fusion

Prototype was a Dark Hunter1 created when a Toa of Fire and a Toa of Earth were merged by the power of the Spear of Fusion. Driven mad by the experience, Prototype was recruited into the Dark Hunter organization. He was extremely strong and virtually invulnerable.2

Prototype, as he was code-named, was created when a Dark Hunter discovered the Spear of Fusion and tested it on a Toa of Fire and a Toa of Earth just as they are merging their forms. Instead of destroying them, the weapon fused the two Toa together permanently and drove them mad. The resulting being was Prototype, who went on a rampage and then disappeared for several centuries. The Dark Hunters later found him living in a swamp on an otherwise desolate island. In some strange way, his life force had become tied to his armor, and his armor was damaged. The Dark Hunters brought Prototype back to Odina and restored him to health. So many years alone had increased Prototype's madness, making it easy to persuade him to join the Dark Hunters. Prototype was undeniably unstable, violent, and insane, all qualities which appealed to the Shadowed One.3

Prototype still retained some elemental power over fire and earth. Over time, his organic parts had become almost nonexistent, making him virtually all machine. He was slow-moving, but he was extremely strong and almost invulnerable. After so many years, it would have taken an enormous amount of force even to scratch his armor, let alone damage it.3

As of story year 2006, Prototype was active. When not on missions, Prototype served as a practice target for other Dark Hunters. If they survived their encounter with him, they were deemed ready to face the world.3

Prototype was a bizarre figure. He was the product of a forced merge between a Toa of Fire and a Toa of Earth, which somehow resulted in a hybrid entity possessing enormous power, very little sanity, and really big claws. When Zaktan's rebellion took place, he was leading a small number of guards on duty at the gates of the Shadowed One's fortress. It was difficult for Vezok to distract him with conversation, as Prototype was not much of a conversationalist. When Zaktan fired a surprise attack with his laser vision at his back, it had no effect on him. Prototype was able to bat Zaktan aside with ease. Prototype was extremely dim-witted, and Vezok was able to trick him into leaving his post to meet the Shadowed One at a training facility that did not exist.4

After his transformation, Prototype no longer had Toa power and the ability to transform into a Turaga.5