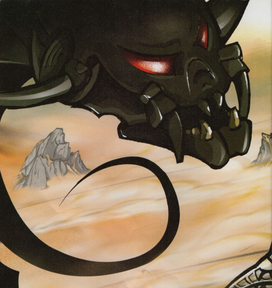 Sand bats were large, winged serpents found in the Bara Magna wasteland. They lived underground due to their dislike of direct sunlight. They erupted out of the sand to attack prey, then dove back under again.1

The telltale sign of a sand bat about to burst out of the ground was sand moving like ocean waves. According to Metus, the creature's real name was very long – so long that by the time someone finished saying it, the creature had already eaten him or her – so they simply called them sand bats. It looked like a huge snake with bat wings and was at least 15 feet long. A sand bat would burst out of the sands and soar straight up into the air, then dive down at its prey while screeching. After striking it would disappear into the ground again. The sand bat was strong, and its wings were impervious to damage from Mata Nui's sword. Despite being stronger than its prey, the sand bat would dive back underground frequently during a fight. Mata Nui discovered that the reason for this was that the sand bat hated sunlight. If caught in the sunlight for more than a few moments, its wings, then its whole body, would start to give off smoke.2

The natural enemies of the scarabax were the sand bats, winged serpents who lived beneath the sand due to the sensitivity of their hide to the sunlight. Sand bats would burrow through sand and consume an entire colony of scarabax if given the opportunity. Although the sand bats were much bigger, they could not fight off an entire swarm of beetles and would usually lose a direct confrontation.3

The sand bat looked like a python with bat wings. It lived under the sand, mostly, sprang out, attacked, then dove back under. They were about 7 to 8 feet long.4