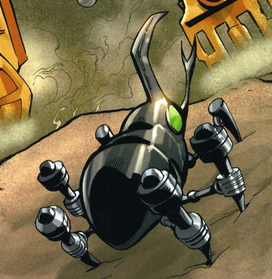 On Bara Magna, on any normal night, Scarabax were out searching the sand for food.1

Scarabax beetles lived underground during the heat of the day, coming out at night to feed on sand mites and other smaller insects. Although not hostile by nature, scarabax could be dangerous when threatened. Their most common method of defense was to fly at the enemy in a swarm. They almost never attacked Agori or Glatorian unless their nests were disturbed, but they were still considered pests by most residents of Bara Magna.2

The natural enemies of the scarabax were the sand bats. Sand bats would burrow through sand and consume an entire colony of scarabax if given the opportunity. Although the sand bats were much bigger, they could not fight off an entire swarm of beetles and would usually lose a direct confrontation.2