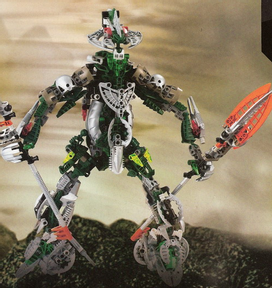 Spinner was a Toa of Air who defected to the Dark Hunters.1, 2 As a Dark Hunter, his eyes could cause vertigo in a target, and his Rhotuka spinners could affect an enemy's sense of balance. The combined power of his spinners could cast a target into a coma, although this weakened Spinner as well. The atmosphere around Spinner tended to be heavy and poisonous, making it difficult for him to sneak up on anyone.2

Spinner, as he was code-named, was originally a Toa of Air who was part of a contentious team of Toa locked in battle with mutated Rahkshi. During the fight, Spinner was hurled into a near-bottomless pit. Although it was unclear how this happened, Spinner claimed it was one of the other Toa who did it. Spinner eagerly joined the Dark Hunters.3

As a result of Dark Hunter modifications, Spinner lost access to his elemental power of air. He also became enveloped in a perpetual aura of heavy, poisonous air. This made him of little use on stealth missions. Spinner's eyes could cause vertigo in an opponent with just a glance. His twin slicers launched Rhotuka that affected an opponent's sense of balance. When the slicers were combined, the resulting Rhotuka could put an enemy into a coma, although the amount of energy needed to create this Rhotuka incapacitated Spinner for some time as well. Since Spinner's powers worked well over distance, he could disable perimeter guards around a target very quietly and efficiently. Spinner said that he only wanted to hunt Toa, but the Shadowed One insisted that he would take the missions given to him or else be punished by being subjected to his own power permanently.3