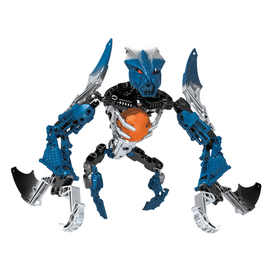 Vamprah was the silent hunter of the Makuta. He loved to stalk Matoran and use his mask to turn them into shadow versions of themselves. Often, he would allow his prey to escape temporarily just to prolong the pleasure of the hunt. While capable of speech, Vamprah believed that a good hunter never made unnecessary noise. Vamprah wore the Kanohi Avsa, the Mask of Hunger, which was capable of draining energy or light from a target over distance. He used knife-sharp wings and claws in combat and also carried a Tridax pod filled with shadow leeches. He was blinded by the light explosion in Karda Nui and had to rely on a shadow Matoran to provide him with sight.2

Vamprah was a silent hunter, swooping down in his black wings and using his Kanohi Avsa, the Mask of Hunger, to feed on the hopes and dreams of his victims. Gavla's power to disrupt a foe's sense of balance made her dangerous in aerial combat. Vamprah was a hunter.3

When physically linked with Vamprah, Gavla gained the ability to disrupt an opponent's balance. Vamprah was able to see through her eyes when in physical contact with her.4

Vamprah specialized in honing his skills as a hunter.5

Vamprah did not have a team of Toa Hagah.6