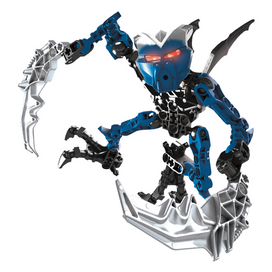 Gavla was the first Karda Nui Matoran to be transformed into a shadow Matoran and later leader of that group. Gavla had never liked her fellow villagers and so fell easily into the role of opposing them. When physically linked with Vamprah, she gained the ability to disrupt an opponent's balance. Vamprah was able to see through her eyes when in physical contact with her. Gavla was transformed back into an Av-Matoran against her will and agreed to travel to Metru Nui only because she saw no other option left to her.2

With Vaprah, Gavla's power to disrupt a foe's sense of balance made her dangerous in aerial combat.3

Gavla was not evil per se, but was lonely and friendless. Gavla, before becoming a shadow Matoran, never stole or robbed or killed anyone. She wasn't evil. But she didn't feel welcomed or wanted by her tribe. She did feel needed by the Makuta, which is why she didn't want to go back to being an Av-Matoran. That's not being evil, that's just wanting to feel like you matter to someone.4