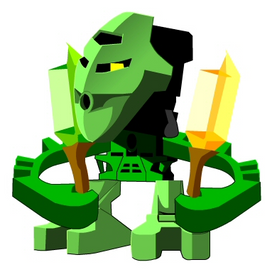 Vira was a Le-Matoran from Le-Metru. He wore a light green Pakari, his torso was green, and his feet were light green. Before meeting Matau, he had never met a Toa before, only seen one.1

A Le-Matoran transport manager once assisted Toa Matau in Sector 3 by telling him where Orkahm went. He had seen Toa before, long ago, but had never met one. However, he knew the legends that said that Toa were meant to protect Matoran and keep them safe.2