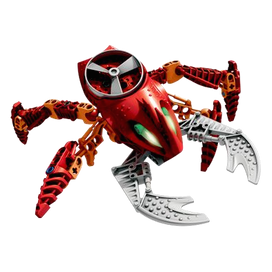 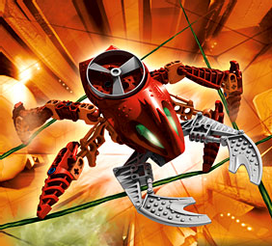 Vohtarak were one of the six Visorak breeds which invaded Metru Nui. Vohtarak had a natural resistance to fire and heat. Their preferred method of attack was to charge wildly while launching multiple spinners. They were also capable of making "berserker charges," during which their outer shells became virtually invulnerable. Their Rhotuka spinners caused a burning sensation in a target so intense that it would distract him from any other action.1

Aggressive and fierce, Vohtarak were known for making berserker charges at their foes, during which their outer shell became almost completely invulnerable. Their spinners could paralyze or produce a burning sensation in a foe, so painful that the target could not even think straight.2

The Vohtarak's spinner could create an extremely painful burning sensation in a target, one so severe that the victim could not concentrate on anything else. Vohtarak were always aggressive and were capable of making berserker charges, during which their outer shell became almost invulnerable to harm.3