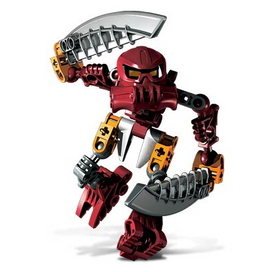 Balta was a Ta-Matoran1 who was a member of the Matoran resistance on Voya Nui.2

Balta was Garan's best friend and a very resourceful inventor. When crossed, his twin repellers blocked any attack, causing the attacker to be hit with an equal force.3

Balta helped steal one of the Piraka's Zamor sphere launchers. Axonn later rescued him from a sealed cave. Balta later organized the rescue of Garan from the Piraka.4

Balta was a skilled tinkerer, able to make a weapon out of whatever materials were at hand. His twin repeller tools, when crossed, could block any enemy attack and strike back with equal force.4

Balta was a Ta-Matoran member of the Matoran Resistance. Balta was the weapons maker for the team and one of the most daring of the group. He carried twin repeller tools which could block an enemy and strike back with equal force.5

Balta, along with Velika, was an inventor.7

Balta and Velika invented weaponry for the Resistance.8

Balta's repeller blades could not be used to repel the ground and slow him down if he fell.9