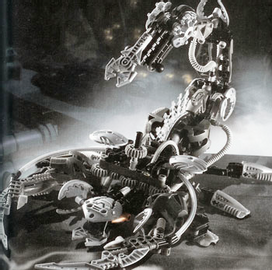 The catapult scorpion was a dangerous breed of Rahi which dwelt in Po-Metru. It had the ability to materialize a ball of molten magma at the end of its tail which rapidly cooled into solid rock and could be hurled at foes. They were considered extremely hostile. They fed on raw protodermis. None were ever seen on Mata Nui.2

Catapult scorpions were insectlike Rahi known for their almost unparalleled savagery among Rahi. They lived in nests in the caverns beneath the Sculpture Fields in Po-Metru. They emerged on rare occasions, leaving utter devastation in their wake. Phase dragons, rock raptors, tunnelers, and Po-Matoran alike avoided these creatures when they were active on the surface. At first glance, a catapult scorpion could be mistaken for a large Nui-Jaga, but this was a common and often fatal mistake, for these Rahi were far more hostile and dangerous. The catapult scorpion had two razorlike pincers, sharp teeth, and a head covered in spines and horns, making it a fearsome creature. In addition, its most effective tool was its "catapult" stinger. In some manner never explained, it was able to materialize a ball of molten magma at the end of its tail, which then quickly hardened into solid rock. The scorpion then snapped its stinger forward, launching the projectile at its foes. Catapult scorpions were hostile to almost anything that moved, except for Kikanalo. Catapult scorpions ate solid protodermis, and their preferred method of finding it was to follow behind Kikanalo herds and consume whatever the beasts' horns dug up.3

When the Kikanalo herds were on the wane during the Visorak invasion, catapult scorpions were forced to wander out of Po-Metru in search of food. Norik remarked that finding Kikanalo was a good way to find a catapult scorpion.3