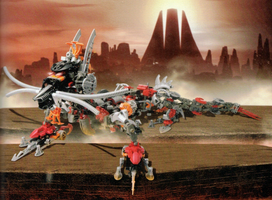 The Kanohi Dragon was a mysterious Rahi beast said to have vanished from Metru Nui 3,000 years before the coming of the Toa Metru. After its defeat it was brought to the island of Xia, where it remained to the present day. The Kanohi Dragon was a creature of fire, able to fly and relying on its flame breath, smoldering tail blades, and claws in combat. Its name came from the Kanohi masks that seemed to line its body. Some Matoran claimed they were real masks, while others said that they were decoys designed to lure Toa close.2

The great Kanohi Dragon was a creature of legend, a mysterious beast that seemingly vanished from Metru Nui more than a thousand years before story year 2005. Little information on this creature existed in the Archives, and what data was present was open to debate and interpretation. It was clear, however, that this was one of the most powerful Rahi ever to appear in Metru Nui, possibly even rivaling the combined might of the Toa themselves. The data fragments in the Archives described the Kanohi Dragon as a monstrous, reptilian creature that emerged from the hottest furnaces and foundries in Ta-Metru. It was wreathed in fire and smoke, and it could fly, slithering like an oily snake across the sky. Hot cinders and ash fell from the Kanohi Dragon as it flew, leaving behind a reminder of its great power. In battle, the Kanohi Dragon relied on its fiery breath and sharp claws. At the end of its whip-like tail sprouted two smoldering blades that it used to capture opponents by surprise. Most noteworthy of all was the creature's glistening hide, covered in overlapping scales of the hardest protodermis. Spaced throughout this armored coat were what appeared to be Kanohi masks, permanently attached to the creature's skin. Some researchers speculated that they were real Masks of Power, while others believed that they were mask-like protodermis growths used to draw curious Toa to their doom.3

When Rahaga Pouks asked Vakama about the Kanohi Dragon, Vakama claimed that it had not been seen for generations. He knew only that Toa Lhikan and ten of his comrades had fought a great battle against the creature and driven it away long ago. Lhikan had never cared to share more of the tale, suggesting what an awful battle it must have been.3

Vahki were not effective against the Kanohi Dragon; the heat given off by its body melted them. Its armored scales deflected the Toa's blows.4

As of the Toa Mahri's mission in the Pit, rumor had it that the Kanohi Dragon was being studied in hopes of artificially reproducing its power.5

The Kanohi Dragon could be subdued by keeping it cold.6

The Kanohi Dragon was among the strongest Rahi.7