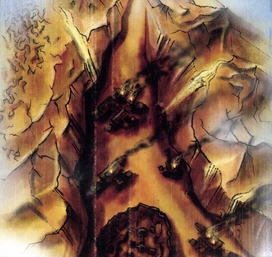 Karzahni was also the name of the realm ruled by Karzahni. Located in a canyon, it was a strange, frightening place filled with ice that burnt, fire that froze, dust that fell, and other bizarre features. It was inhabited by Matoran who were sent there for repairs and then kept as prisoners by the mad ruler. Manas and Dust Darters could be found here. Karzahni was the second location created by the Great Beings.1

In contrast to Artakha, which was a place of refuge for Matoran, Karzahni was a place of exile and doom. It was situated in a rarely traveled area south of Metru Nui. Karzahni was created along with Artakha in the first days of the Matoran universe. Originally, Karzahni was reachable by sea as well as by land. However, the water routes dried up long ago. The region became landlocked, and the sole remaining access route was extremely treacherous. The overland route passed through a barren wasteland which claimed the lives of more than one Toa over the years. Then, a tunnel which devoured light led up to an archway through which no one with the power of light could pass. A mountain road led from there to Karzahni itself; this road was guarded by Manas and haunted by the realm's tragic Matoran inhabitants.2

Karzahni's environment was bizarre and twisted. Fire provided no warmth, and the touch of ice burnt. Falls of dust cascaded over mountains, and pools of water sat unmoving. Thunder made no noise, but the sound of a gentle breeze could be deafening.2

Karzahni sat in the middle of a bowl-shaped canyon. The pathways leading to it were flanked by what appeared to be stone statues of Matoran; in reality, these were Matoran turned to stone as punishment for laziness. As the Matoran have become rock, the stones of the pathway became a form of life and screamed when tread upon.2

Karzahni's fortress sat in the middle of the realm. This fortress was once a stunning landmark, but it degenerated over time into an unwelcoming, charred ruin with fires burning visibly inside. Karzahni's only other major structures were the huge forges and furnaces used to make tools and weapons and (allegedly) repair Matoran's mechanical parts. The Matoran inhabitants have no shelters, but instead remain outdoors, exposed to the elements, with no place to rest except for the bare rock.2

The Matoran prisoners of Karzahni remained trapped in the realm for tens of thousands of years. Most gave up any hope of escape long before. A small number became willing servants of Karzahni. The rest simply wandered among the rocks, all life gone from their eyes. All of them were physically damaged in some way, and most of them did not speak, since there was no reason to talk about anything. Although there may have been a few Matoran who still had some fire inside, the Matoran were so afraid of Karzahni that they would have been more likely to fight their liberators than to help them.2

Very few living things could survive in Karzahi's barren wasteland. It was rocky, mountainous, and largely arid. The creatures which inhabited it tended to be either large and dangerous or small enough to remain below predators' notice.2

Large numbers of Manas lived in Karzahni and served as guards for the ruler. Unlike wild Manas, these Manas were well disciplined and guarded the only way in or out of the realm. The Matoran lived in fear of the Manas, and there mere presence was enough to discourage escape attempts. The presence of so many Manas meant that it would have taken an army of Toa to seize the realm, and with considerable cost at that.2

The Dark Hunter "Devastator" was reported to have emerged from a fiery crag in the barren wastelands of an island not too far south of Metru Nui. According to Matoran legend, this was the domain of Karzahni, a powerful being whose realm was said to be the last stop for incompetent Matoran.3

Karzahni was built by Matoran.4

Karzahni was home to hundreds of Matoran prisoners with distorted bodies and crushed spirits.5

Karzahni was an isolated, forbidding realm.6

The Makuta assigned to the realm of Karzahni was Icarax.7

Karzahni's realm was not exactly an island.9

Karzahni's realm was less of an island and more of an isthmus.10

Underwater chutes connected Metru Nui to a narrow strip of land which led to Karzahni's realm.11

The archway leading to Karzahni's realm didn't repell all Toa, only beings with the power of Light.12

The dark tunnel leading to Karzahni's realm wasn't dark because of a natural effect, but because something was inside consuming the light.13

The tech to create Toa canisters was not available in Karzahni. The canisters stolen by Jaller's group were brought from elsewhere.14

The Matoran in Karzahni were so broken and miserable that they did not retain much sense of community.16

The Matoran of Karzahni didn't say anything, even if Karzahni wasn't around.17

The Matoran of Karzahni would fight others if they were told to.18

The Matoran of Karzahni didn't have powers and most were damaged, essentially the Matoran equivalent of zombies.19

The Matoran of Karzahni could die.21

Matoran likely arrived on Karzahni after being shipped there. They likely did not fear the voyage because the realm had not earned its reputation yet.22

Deportation to Karzahni had nothing to do with talent or lack of talent. The point was to send damaged or ill-performing Matoran to be healed or repaired so they could be sent back.23

Turaga were the ones who sent Matoran to Karzahni.24

Karzahni's modifications did not prevent Matoran from being able to form Kaita or Nui.25