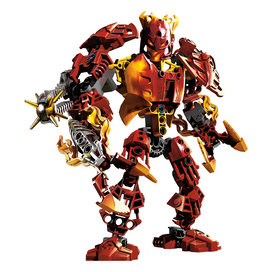 Malum was once the Second Glatorian in the village of Vulcanus. Tall and strong, he won most of his matches, although sometimes his methods struck even Raanu and the villagers as too violent. More than once, Malum dealt potentially crippling injuries to other Glatorian in the arena. Since other villages could not prove that Malum did it intentionally, they could not call for him to be punished. It was inevitable that Malum's behavior would go too far one day. Malum was a fighter all his life, first with the army of the Element Lord of Fire, later as a Glatorian. After falling in with the Vorox, Malum set himself up as a king, devoting himself to guiding and protecting his new tribe. He had no interest in taking revenge on Vulcanus, nor was he very interested in helping the Agori. His major concerns were the bone hunters, who competed with the Vorox for resources and killed many of them, and the Skrall, who kidnapped Vorox for unknown purposes. Since the outbreak of war, Malum led some Vorox raids on Skrall supply caravans and clashed with Skrall patrols. However, he did not allow his Vorox to ally again with the Glatorian and Agori, since he did not believe the villages were much better when it came to their treatment of Vorox. Malum carried a Thornax launcher and wore spiked "fire claw" gauntlets on his hands. He briefly wielded a sword made for Ackar, but it was stolen from him by the Skrall.1

Incredibly powerful, Malum would do anything to win. Armed with flame claws and a spiky Thornax launcher, he was exiled from his village for breaking the rules of the arena.2

Tarix once beat Malum in a match using a back-flip maneuver to dodge a Thornax.3

Malum was once the Second Glatorian of Vulcanus but was exiled for crimes in the arena.4

One pack of Vorox was led by the ex-Glatorian Malum.4

Malum was formerly the Second Glatorian of Vulcanus. As of story year 2009, his recent disgrace and exile from the village left Vulcanus short a fighter.5

During the war between the Agori and the Skrall, Malum led the Vorox on some raids against the Skrall and their bone hunter allies. However, they were done more in revenge for actions the Skrall had taken against the sand tribe. Neither Malum, the Vorox, or the Zesk felt the war was theirs to fight.6

The only non-Zesk or Vorox known to associate with Vorox was Malum, who led a pack. How long it would be before another Vorox male challenged Malum for leadership remained to be seen as of story year 2009.7

Malum had contempt for Raanu for exiling him.8

Malum's flame claws were part of his armor.9

Malum led probably 40-50 Vorox.10 The Vorox and Zesk that Malum led were willing to die for his sake.11