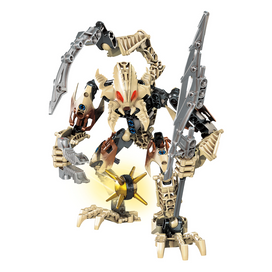 Vorox were some of the most dangerous and most tragic beings on Bara Magna. Although they were disliked and feared by virtually all Agori and Glatorian, it was hard not to feel pity for them. Every tribe knew that, had things gone another way, any of them might have ended up like the Vorox. The Vorox were once warriors of the Elemental [sic] Lord of Sand, fighting in the Core War. Native to the Bara Magna desert, they were known even then for their wild, unpredictable, and often primitive behavior in battle. Their natural stinger tails made them seem like some sort of strange creature of the sands. In hindsight, it seemed obvious that the Vorox had always been on the edge, walking a line between civilization and savagery. It would have seemed that the Vorox would be the best equipped to thrive in Bara Magna after the Shattering, since they knew the secrets of survival in the desert already. However, life is unpredictable, and as the Agori said, "Sometimes the tallest mountain is the first to crumble." As the climate in Bara Magna grew even harsher and resources became more scarce, the Vorox began to regress to barbarism. While Tesara, Tajun, Iconox, and Vulcanus were establishing the Glatorian system to settle disputes, the Vorox and the Zesk were living in the ruins and in underground tunnels they dug in the sand. Foraging for food or stealing it from villages, attacking anyone who came into what they considered their territory, the Vorox rapidly gained a reputation as dangerous brutes. They were barred from entry into any village, driven off by force any time they appeared, and seen just as more dangerous desert creatures. After long enough of being treated as animals, they became animals. Protected by the armor they once wore as warriors, and carrying the swords and launchers they used in the war, the Vorox remained a menace to any who crossed the desert. Like a sandstorm, it was almost impossible to predict where they would strike, and little was left standing after they did. Unlike bone hunters, they had no real interest in valuable items like exsidian ore, but they would attack caravans carrying food or water. Sometimes, it seemed they struck just of pure savagery, wrecking wagons and wounding or killing the drivers but leaving the cargo behind. Vorox were particularly disliked by bone hunters. Both groups were nomads, and both survived by robbing from others, making them competitors. Bone hunters looked down on Vorox as stupid beasts and would go out of their way to kill them. Vorox saw bone hunters as invaders in their territory and ambushed the bandits at any chance they got. Although to an outsider they seemed like little more than beasts, Vorox were not animals. Many still retained enough intelligence to be able to speak the language of the Agori. They did have a social system, founded on packs led by the strongest male. They also showed great loyalty their leaders and to their pack, sometimes even sacrificing themselves to save the weaker members of their group from attack. Though frightened by things like lightning or flame, they had the heightened senses of born hunters and were fierce opponents in a fight. The only non-Zesk or Vorox known to associate with Vorox was Malum, who led a pack. How long it would be before another Vorox male challenged Malum for leadership remained to be seen as of story year 2009.2

Vorox hid in the sands of the wasteland and hunted travelers.3

More than 100,000 years ago, Vorox were a race of proud warriors. As of story year 2009, they were primitive near-beasts who stalked the wastelands of Bara Magna. They were fast, dangerous, and did not take prisoners. One of the savage sand tribe, a Vorox loved to fight. A Vorox was quick enough to use his sword, spiky Thornax launcher, and stinger tail all at once, so battling one was like taking on three enemies at once.4

For months leading up to mid-story year 2009, the Skrall were capturing Vorox and training them to be guard animals. The training was brutal, and not all of the Vorox survived. The Skrall kept them chained to walls. Vorox were desert dwellers and were used to open sand and endless sky, and they hated to be chained. Even among the Skrall, a maddened Vorox running loose could be a menace.5

Vorox were of the Sand Tribe and were located in the Wastelands. Their equipment was a sword, a stinger tail, and a Thornax launcher.1

Vorox were some of the most dangerous, and most tragic, beings on Bara Magna. Once they were warriors of the Element Lord of Sand, fighting in the Core War. Native to the Bara Magna desert, they were known even then for their wild, unpredictable, and often primitive behavior in battle. Despite knowing the secrets of surviving the desert, the Shattering had a disastrous effect on the Vorox. As the climate in Bara Magna grew even more harsh, and resources even more scarce, the Vorox began to regress to barbarism. While Tesara, Tajun, Iconox, and Vulcanus were establishing the Glatorian system to settle disputes, the Vorox were living in the ruins and in underground tunnels they dug in the sand. The Vorox quickly got a reputation as beings best avoided. They spent most of their time foraging for food or stealing it from villages. Anyone who entered what the Vorox saw as their territory would be brutally attacked. They were barred from the villages of Bara Magna and were looked on by Agori and Glatorian as vicious animals.1

The Vorox also had problems with bone hunters and Skrall. Bone hunters saw them as competition, since both groups robbed caravans for food and water. Skrall hunted Vorox for sport or kidnapped them and caged them in Roxtus.1

Although they were savage, the Vorox were not creatures. Some could still speak the language of the Agori, though not very well. They had a social system of their own, based on packs led by the strongest male. They were capable of loyalty and friendship within their own packs. Vorox could be frightened by things like lightning or fire, but they were also fierce opponents in a fight. A pack of Vorox had been known to ambush and wipe out a squad of Skrall.1

Following the defeat of the Skrall and the unification of the Agori villages, the Vorox remained in the desert. They continued to be feared by all other intelligent beings.1

Vorox were pack animals, suspicious and hostile toward outsiders. With very few exceptions, Glatorian and Agori had not survived encounters with these beast-like beings.1

One pack of Vorox was led by the ex-Glatorian Malum.1

The "villagers" protected by Vorox were called Zesk, who were also part of a pack society.1

Zesk produced a musk that could be used by others as protection against Vorox. The scent convinced the Vorox that the being wearing it was a friend.1

The Dunes of Treason got their name by being a prime hunting ground for the Vorox. Innocent-looking sand dunes often turned out to conceal the savage beasts, making it impossible to trust one's eyes there.6

The desert-dwelling Vorox learned to make do eating native plants in the wasteland that others might have found inedible. Travelers who crossed the Dunes of Treason risked running into Vorox colonies, known for killing anyone who came into their territory.7

Before the Shattering, the nomadic Zesk stayed close to the more powerful Vorox, who protected them against most dangers. In return, the Zesk gathered food and water for the Vorox. In many ways, this was similar to the Agori-Glatorian relationship that existed later. After the Shattering, their relationship with the Vorox survived unchanged, however. As far as story year 2009, the powerful Vorox still protected the Zesk, and the Zesk saw to the Vorox's needs as best as possible. Both groups lived in extensive colonies underground, emerging only to hunt whoever passed through their territory. Zesk saliva had a musky odor, a scent the Vorox recognized as belonging to a friendly being. Anyone doused in the fluid could pass through a legion of Vorox in complete safety. To avoid attack, traders, Glatorian, and even bone hunters learned to watch the sands for the holes that were telltale signs of Vorox and Zesk presence. During the war between the Agori and the Skrall, Malum led the Vorox on some raids against the Skrall and their bone hunter allies. However, they were done more in revenge for actions the Skrall had taken against the sand tribe. Neither Malum, the Vorox, or the Zesk felt the war was theirs to fight.8

Skrall sometimes kidnapped Vorox to fight in matches in the city of Roxtus for entertainment, the only time when Vorox could be found in the arena.9

Bone hunters and Vorox cooked Thornax stew, which others could not stand.10

Bone hunters competed with Vorox for resources and killed many of them. Skrall kidnapped Vorox for unknown purposes.12

Before they regressed, Vorox were once more like other Glatorian.13