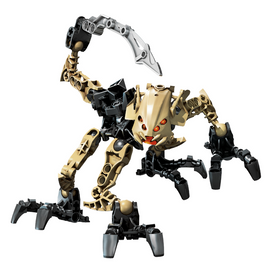 Zesk were once members of Spherus Magna's sand tribe, native to the desert region of the planet, Bara Magna. Nomadic by nature, they stayed close to the more powerful Vorox, who protected them against most dangers. In return, the Zesk gathered food and water for the Vorox. In many ways, this was similar to the Agori-Glatorian relationship that existed later. After the Shattering, the climate of Bara Magna changed, and food and water became harder to find. Since they already had a less sophisticated social structure than many other tribes, the Zesk regressed over time to being more wild and brutal. They became bestial, and other tribes started avoiding them. The Zesk eventually lost most of their command of the Agori language and began resembling packs of desert creatures. Their relationship with the Vorox survived unchanged, however. As far as story year 2009, the powerful Vorox still protected the Zesk, and the Zesk saw to the Vorox's needs as best as possible. Both groups lived in extensive colonies underground, emerging only to hunt whoever passed through their territory. Zesk did not live an easy life. Hated and feared by other tribes, they preferred to be left alone. Both the Skrall and the bone hunters were known to hunt Zesk for sport. They were also valued for their ability to find Thornax plants, even in the most remote regions. Traders would often follow them across the sands hoping to find the valuable fruit. Zesk had a number of unusual features. They still wore their old armor and helmets, whose design made it seem like they had four eyes. Their senses of sight and smell were enhanced. Their saliva had a musky odor, a scent the Vorox recognized as belonging to a friendly being. Anyone doused in the fluid could pass through a legion of Vorox in complete safety. Although not very strong individually, Zesk almost never fought one-on-one. When dealing with a larger foe, Zesk relied on their sheer numbers. They massed and surrounded the enemy, chattering and shrieking. If the target was on foot, they would pile on. If mounted, they would try to frighten the mount into rearing and tossing its rider. It was for this reason that traders, Glatorian, and even bone hunters learned to watch the sands for the holes that were telltale signs of Vorox and Zesk presence. Zesk did not have much of a role in the war between the Agori and the Skrall. Although Malum led the Vorox on some raids against the Skrall and their bone hunter allies, they were done more in revenge for actions the Skrall had taken against the sand tribe. Neither Malum, the Vorox, or the Zesk felt the war was theirs to fight. The Zesk normally did not carry weapons. Their lone natural tool was their stinger tail, with which they were extraordinarily fast. Some believed the Great Beings tampered with the evolution of the Zesk to explain why they had that tail. Zesk normally walked on all fours.1

Zesk were little more than beasts, having lost their civilization post-disaster. With scorpion-like tails, they struck at anyone who passed through their territory.2

The "villagers" protected by Vorox were called Zesk, who were also part of a pack society.3

Zesk produced a musk that could be used by others as protection against Vorox. The scent convinced the Vorox that the being wearing it was a friend.3

Zesk were once Agori, like the other villagers, albeit physically a bit different.4

Zesk were the same species as the Agori, although they had changed a lot.6