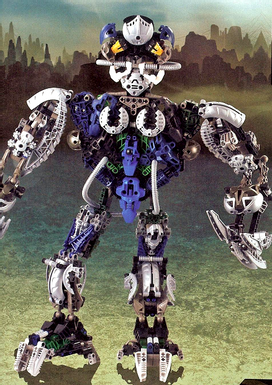 Minion was a mute enforcer for the Brotherhood of Makuta and later Dark Hunter.1, 2 His claws were long and razor-sharp, and his armor was impenetrable.2 He was formidable and colored blue and white.3

Minion, as he was code-named, was reputed to have been an enforcer for the Brotherhood of Makuta. He was created during one of their many imaginative experiments with Rahi. Minion spent a great deal of time around Teridax and other members of the Brotherhood. None of the Brotherhood realized that their experiments had increased Minion's intelligence to the point where he understood everything that they said. He listened and learned, planning to put his knowledge to use someday. When the Toa Hagah rebelled, Minion took advantage of the confusion to escape and made his way to Odina. From that day forward, he never spoke a word. The Shadowed One did not know whether the Brotherhood's work made him mute or if he was simply keeping his secrets, but he was convinced that Minion held a wealth of knowledge on the Brotherhood, which made him a potentially valuable pawn in the war against them. The Shadowed One was determined to extract this information someday. The Shadowed One preferred to keep Minion nearby in case he suddenly found his tongue. He kept him on active guard duty against the unlikely event that the Brotherhood attempted to attack his fortress.4

Minion's hide was covered with impenetrable armor, and his claws were long and razor-sharp. His tracking skills allowed him to sense the approach of a Makuta from a continent away.4