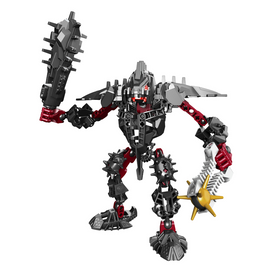 Stronius was an elite Skrall warrior, one of the select few members of the legions to have a name, and right-hand man to Tuma. He was brutal, violent, and lacked the patience his leader had. The period of inactivity while waiting to attack the villages of Bara Magna annoyed him, to the point that he began wandering the desert, attacking and robbing any Glatorian he ran across. Stronius earned his favored status during the Core War. Stronius carried a club studded with metallic thorns and a Thornax launcher.1

An elite Skrall warrior, Stronius met the challenges other Skrall could not. Armed with a spiked Thornax launcher and a club lined with metal thorns, he was a menace to every Glatorian.2

If Atakus could be said to have had a hero, it would have been Stronius, one of the Skrall elite warriors. When not on duty, Atakus stayed close to Stronius, hoping to pick up combat techniques or other tips. Stronius, for his part, did not have much use for Atakus but could not be bothered discouraging him, either. If he got bored, Stronius would sometimes have Atakus torment the caged Vorox for his amusement.3

Stronius was part of a special forces Skrall class who showed great heroism in battle, hence his having a name.5