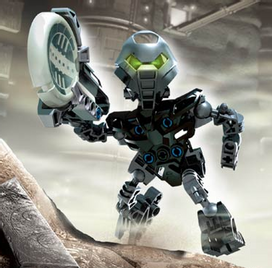 Tehutti was an Onu-Matoran1 archivist. On Mata Nui, he worked as a miner.2

Tehutti was a veteran worker in the Archives of Onu-Metru. He dreamed of finding a treasure that would make his reputation.3

Tehutti was an archivist. He was known to spend all of his time in the Archives. He spent his whole life down with the exhibits. Tehutti's pride and joy was an exhibit of a Kane-Ra bull in the first of the Rahi wings on the main floors. Tehutti had his own transport cart. Tehutti was always on about one piece of exhibit trivia or another.4

Tehutti kept copies of Archive records in a cabinet in his home. Tehutti also kept his vast private collection of Metru Nui artifacts on a set of shelves in his home. These rare items came from all over the island.5

Tehutti used a transport cart to carry exhibits from one part of the Archives to another.5

On Metru Nui, Tehutti spent virtually all of his life working in the Onu-Metru Archives. He was a sensible, practical, hardworking Matoran, but he never received the recognition he felt was his due. When he found a Great Disk in the Archives, he became convinced that such an enormous discovery would make him famous. Instead, it got him trapped by Dark Hunters and almost killed by Rahkshi. He later agreed to help Whenua find the disk. As of mid-story year 2004, his whereabouts were unknown.6