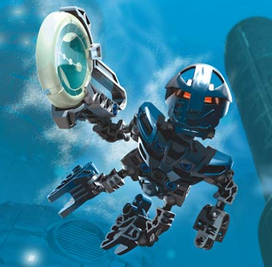 Vhisola was a Ga-Matoran.1 On Metru Nui, she was a student of Nokama's. Vhisola considered Nokama to be her best friend. From the beginning, Vhisola was possessive of Nokama and got angry if she spent time with her other friends.2

Vhisola was a talented athlete and student from Ga-Metru. She felt that she had never gotten the recognition she deserved, making her jealous.3

Nokama first met her friend Vhisola when Vhisola was a student in one of Nokama's classes. Vhisola was always eager to learn, almost too eager. In her enthusiasm, she always seemed to make some mistake or other. Then she would get flustered and make another and another, until her project was a mess. Eventually, Nokama realized that if she spent extra time with Vhisola, she did better work. They became friends, even if sometimes it was a stormy friendship. The more time they spent together, the more time Vhisola wanted to spend. If Nokama said she was too busy to practice kolhii [sic] or explore the canals, Vhisola would sulk.4

Vhisola lived in a small home in Ga-Metru. Although they had known each other for a long time, Nokama had never been inside Vhisola's home until becoming a Toa Metru. This stemmed from the embarrassing fact that the walls of Vhisola's home were covered with carvings of Nokama, records of her achievements, and copies of awards she had won.4

Vhisola spent extra time practicing kolhii [sic] and trying to do better schoolwork to impress Nokama. Besides her home, she only spent time at the school and the kolhii [sic] practice field.4

Vhisola was a student in Ga-Metru and always thought of Nokama as her best friend. She even kept all sorts of items related to Nokama in her house. She would get very jealous if Nokama spent time with other friends, and this only grew worse when Nokama became a Toa Metru. Vhisola knew a secret: the location of one of the six legendary Great Kanoka Disks. She decided to use that knowledge to make herself more famous than Nokama. When knowing that secret put her life in danger, she changed her mind and helped Nokama obtain the Great Disk.6