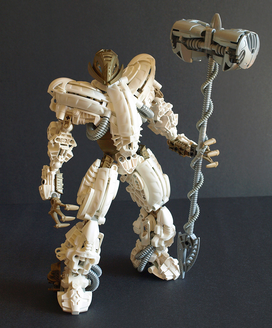 In the Melding alternate universe, Makuta Teridax was a tall, white-armored being. As a Makuta in this universe, his role was to aid the Toa in looking after the villagers, to create new life forms as needed, and to teach the virtues of unity, duty, and destiny to those he and his brothers brought into being. According to Teridax, a Makuta had to be a being utterly without doubt, or fear, or any trace of shadow. It took long years of meditation before one was ready to assume the title. Teridax was able to telepathically read Vultraz's mind to find out about the universe where he came from. Presumably he was not able to read through Mazeka's mental shielding. Teridax was loyal to the Great Beings in his universe.1

As of the end of the story, the alternate Teridax was on Spherus Magna and was the only remaining Makuta other than Miserix.2

After the Matoran universe shut down, alternate Teridax and Mazeka did much the same as everyone else: surviving and trying to build a new life in a new place.3