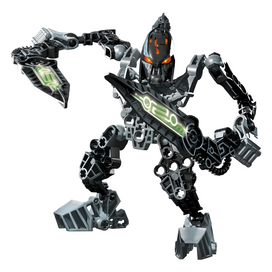 Atakus was an Agori of the rock tribe. A brutal, nasty sort, he took pleasure in mocking Agori from other tribes and pushing them around. He was disliked by just about everyone outside of Roxtus. The saying on Bara Magna was, "If you don't hate Atakus, you must never have met him." Atakus held a number of different jobs in the tribe. He had served as an assistant to Skrall Glatorian. He had also been a gate guard for the city of Roxtus. He also often served as Tuma's spokesman to Agori from other other tribes. Prior to the Skrall arrival in Roxtus, Atakus worked at the last remaining fortress in the northern Black Spike Mountains. If Atakus could be said to have had a hero, it would have been Stronius, one of the Skrall elite warriors. When not on duty, Atakus stayed close to Stronius, hoping to pick up combat techniques or other tips. Stronius, for his part, did not have much use for Atakus but could not be bothered discouraging him, either. If he got bored, Stronius would sometimes have Atakus torment the caged Vorox for his amusement. One fact that was not known to anyone other than Tuma was that it was Atakus who first made contact with the traitor who betrayed the other villages to the Skrall. Atakus carried twin swords, both of which glowed with an unearthly light. These were found in a weapons cache near what the Skrall believed to be a baterra encampment. Since Skrall traditionally cared more about what a weapon did than how it did it, no one in the rock tribe knew how to make more of these swords or how to repair them. Atakus wielded them with great pride and loved to threaten other Agori with them.1

A guardian of the gates of Roxtus, Atakus was fierce and brutal. Anyone who dared approach the city of the rock tribe had to get past his flashing blades.2

Atakus's swords differed from those carried by the Skrall and Tuma in that they glowed.3