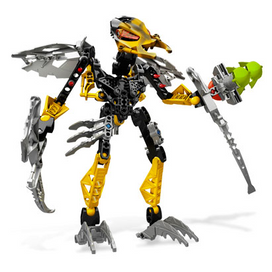 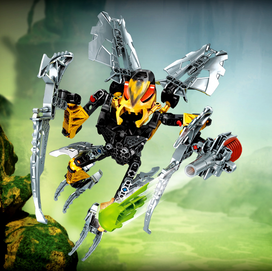 Although Bitil had some skill at creating insect Rahi, his true desire was to be a warrior like Icarax or Gorast. Although he was never as good as they, he was aggressive, daring, and ruthless. He followed Teridax because he saw a chance to rule a universe. Yet, despite having every advantage, he was outfought by the Toa Nuva in Karda Nui, who successfully used their wits against his greater power. Although Bitil was trapped in his insectoid form, he did not suffer as bad a mutation as Krika and Gorast (seeing what happened to them, he got out of the swamp before it could do too much to him). Heavily armed with blades and spiked armor, he still preferred to rely on his ghost blaster whenever possible; it was far easier to fight a foe who could not fight back. Bitil's greatest source of power was his Kanohi Mohtrek, the Mask of Duplication. It allowed Bitil to summon versions of himself from the past to fight alongside him. There were restrictions, however. The past versions could only stay in the present for as long as Bitil could maintain concentration. When they returned to the past, they would remember nothing of the future. If a past self were killed in the present, Bitil himself would cease to exist.1

Time was Bitil's greatest weapon – his Kanohi Mohtrek, the Mask of Time Duplication, let him draw other versions of himself from the past to fight by his side. With his spikes, longsword, Nynrah ghost blaster, and a legion of duplicates as his allies, he was a one-Makuta army.2

Mutran remarked that Bitil's usual way to make a point was to throw a weapon at the wall.3

Bitil did not have a team of Toa Hagah.5