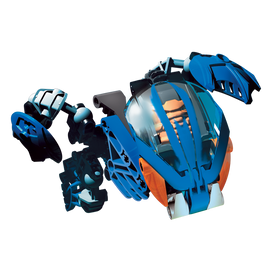 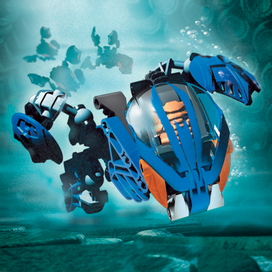 Gahlok were one of the six Bohrok breeds, tied to the element of water. Their water shields could draw moisture from any source and redirect it at an opponent. Gahlok were known for being sly and tricky, rarely reacting the same way twice to a given situation. They were most often seen in Ga-Wahi, but their most successful strike was the flooding of Onu-Koro. They returned to their nests after the coming of the Bohrok-Kal and later re-emerged.1

The treacherous Gahlok were masters of the flood tide.2

The water Bohrok called Gahlok were sly and treacherous. They never reacted the same way twice to any situation, and their unpredictability made them difficult to capture. They were most often seen in the lowlands and near the rivers of Ga-Koro.2

The Gahlok brought the flood tide.3

The Gahlok's color was blue, and their element was water. They were masters of ambushing their foes, usually found near Ga-Koro or Onu-Koro. Their water shields could draw water from and source and redirect it at a target. They could blend in with the waves.4

The stealthy Gahlok hid beneath the waves and struck when least expected.5

Gahlok were the Bohrok of Water. Their shields could draw moisture from any source and direct it at an opponent. Sly and tricky, they never reacted to an attack the same way twice.6