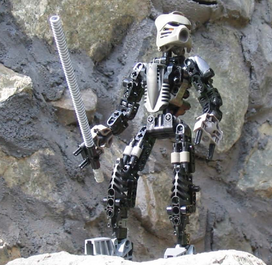 Krakua was a Toa2 of Sonics who appeared to Toa Vakama in a vision.3 He wore the Kanohi Suletu.3, 4

In the far future relative to story year 2005, Toa Krakua was a Toa of Sonics and the lone hero left to defend a besieged island fortress. Using his Kanohi Suletu, the Great Mask of Telepathy, he stayed one step ahead of his enemies by reading their thoughts. His sword could deliver devastating sonic vibrations capable of shattering mountains.5

Krakua was part of the Order of Mata Nui.6

When Jerbraz and Mazeka found Krakua, he was standing apart from the other De-Matoran in his village. The other Matoran avoided him and gave him nasty looks because Krakua hummed to himself, making him eccentric for a De-Matoran, since De-Matoran were very sensitive to noise. Jerbraz remarked that Matoran who were destined to become Toa were sometimes eccentric like that.7

The Order of Mata Nui wanted to train Krakua how to use his power to its fullest before he became a Toa, since Toa of Sonics were vulnerable to their own power.7

Krakua was probably part of a Toa team.8

Krakua's mask was not shaped like the mask of an old hero.10

Krakua's Suletu was likely not in the shape of a Hau.11