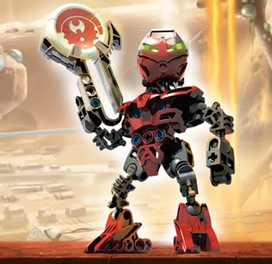 Nuhrii was a skilled mask-maker from Ta-Metru. He planned to create the ultimate Kanohi mask, regardless of the danger to Metru Nui.3

Nuhrii's home was lined with tablets, souvenirs of his work. Each tablet showed an image of a Kanohi mask and the Kanoka disk from which it had been made.4, 5 Among these masks shown were a dark green Matoran Komau made from a Le-Metru disk, a light brown Matoran Matatu made from a Po-Metru disk, and a dark blue Matoran Huna made from a Ga-Metru disk. Nuhrii also had a worktable in his home for making masks.5

In the flawed Great Kanohi Hau that Nuhrii made, the angle of the mask and the ridges around the eyepieces were marks of his work.4

Nuhrii made more flawed masks that needed to be sent to the Protodermis Reclamation Center than Vakama.4

Vakama learned a lot from Nuhrii. Nuhrii was the one who first hired Vakama as a mask-making apprentice and taught him the basic skills.4

Nuhrii was always jealous of Vakama's skill as a mask-maker.6

Nuhrii had been a mask maker for some time before Vakama was ever promoted to the position. It did not take long for Vakama's skills to surpass Nuhrii's, and soon Vakama was getting all the special requests for masks from Turaga Dume. Nuhrii resented this and decided that he could outshine Vakama if he got the Ta-Metru Great Disk and made it into a Kanohi Mask of Power. Nuhrii was lured into a trap by others who wanted the disk, and he was almost killed by Morbuzakh vines. Toa Vakama saved his former coworker, and Nuhrii later helped the Toa find the Great Disk. He disappeared shortly after the Toa defeated the Morbuzakh.7