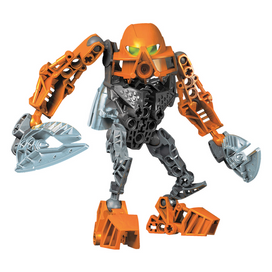 Photok was a daring, risk-taking Av-Matoran. Photok teamed with Pohatu Nuva in battle with the Makuta. Despite sharing a number of dangerous situations, they survived each time thanks to their power and sharp wits. When is physical contact, Pohatu could share Photok's memories, and Photok gained the power of light speed, so he could add to Pohatu's velocity. Photok carried two power swords and wore a rocket booster on his back which allowed him to fly. As of the end of story year 2008, he was living in Metru Nui.1

With Pohatu Nuva, Photok had a lightspeed power.2